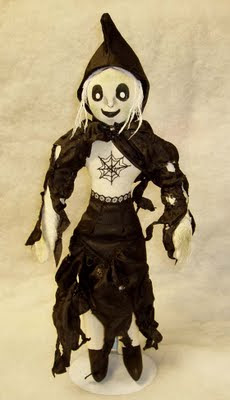 We are having a challenge for our next meeting at the Reining Dolls and Bears doll club. the challenge is to make a Halloween themed doll from a vintage 1948 rag doll pattern. I did not like the head, so that determined the direction of the doll, sho needed her head painted and covered. lol
It's been a logn dry spell for me as far as dolls are concerned, so hope my muse is back.
Her name is Ghoulie.
Posted by Unknown at 10:04 AM 23 comments: 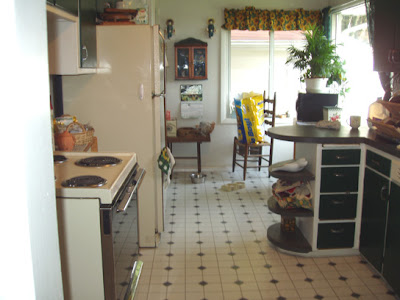 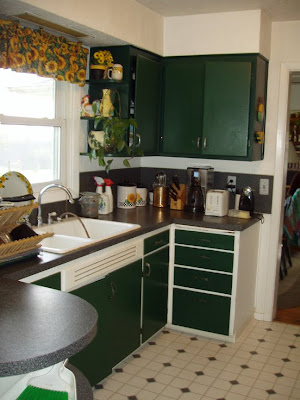 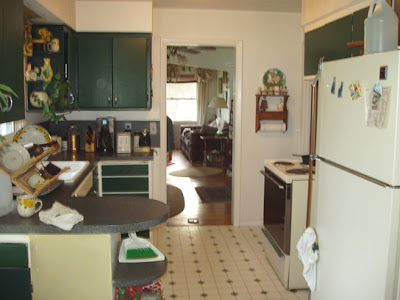 Herer are a few pics of our kitchen before we started the remodel.
To see the after pictures, visit my Picturetrail album:
ttp://www.picturetrail.com/pattidolls
Posted by Unknown at 3:44 AM 3 comments: 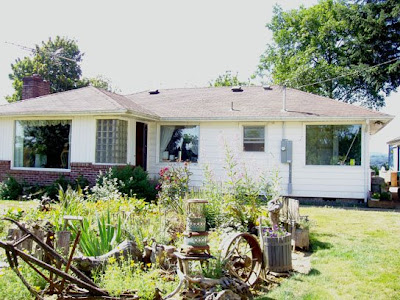 A man named Bob Harris moved our house. Local knowledge says that he was known for his hairbrained schemes. Bob decided he waanted to move the house to his 5 acres of pristine property in the Goble Hills outside of Rainier, Or.
So he cut the house in half and barged it down the Columbia River to the Port of Longview, wehre he put the halves onto a flat bed trailer.
The houses was then hauled up a tiny one-lane twisty turvy country road . There is was reassembled onto the lot where it stands to this day. Even the fireplace and outside brickwork was reassembled.
You cannot tell that the house was devided except in the hallway, where the hardwood floor meets the wall, it is slightly discolored.
Posted by Unknown at 10:09 AM 1 comment: 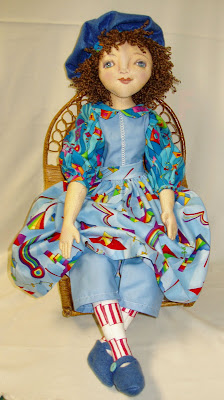 This is a doll I made from deanna Hogan's doll Harvest Moon, featured in this month's doll Crafter and Costuming magazine. I will be at the Windriders Kite Festival at Grey's Harbor this week end, and needed a doll quick to make for the raffle at the awards dinner. She was fun to make, and I especially like the trapunto face and tab joints.
I was in a bit of hurry to get a pic, and too lazy to set of the light studio, so the pic is not that great. I hate setting up all that equipment for just one doll! Wish I had a photography room, as the light studio stuff takes up most of my work space in here.
Posted by Unknown at 11:17 AM 9 comments: 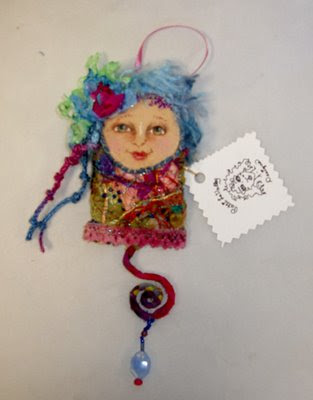 Well, I am afraid my Dotee dolls will deviate a bit from the norm. LOL

The first one just grew and grew, being a free-form piece from some home made chenille fabric scraps I found. hey, the body is 6"! Judy said 3" to 6" for the body, and this one is 6" body length. We are not talking about tail here. lol

2nd one is more "traditional" Dotee, or is there such a thing?

somebody out there will like my tribal Dotte thing, I think.........

Or maybe I should just keep the thing and not send it for the swap?
Posted by Unknown at 6:17 PM 18 comments: 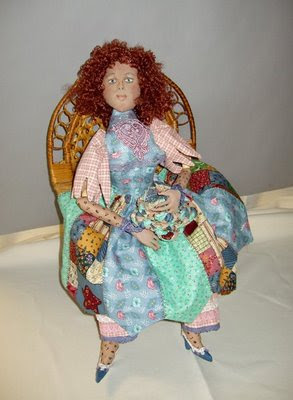 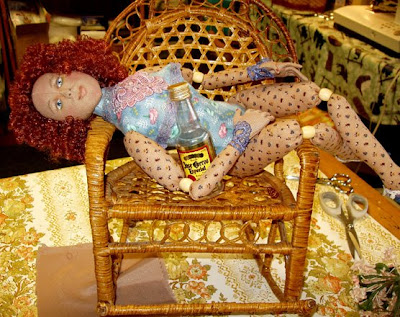 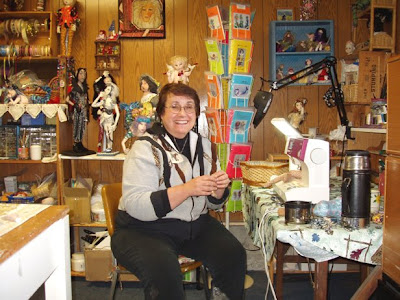 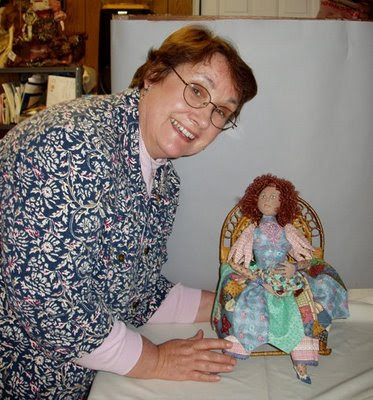 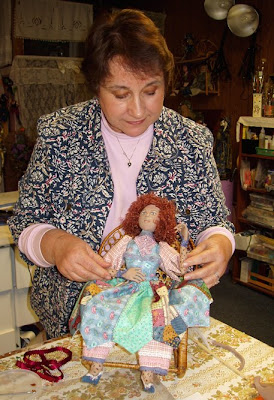 In the first week of March I had Mary Catherine from Castle Rock, Washington here for a 3-day workshop. We really had fun in my little studio and this was Mary's first cloth doll. She was a very enthusiastic student and funny to boot! Anyone who can make you laugh is all right in my book!~


Mary was such a quick learner, and she had a nearly completed doll at the end of three days!


Her doll and her 'stuff" stayed here when she went home at night. When I came out into the studio one morning, I saw that her doll had been having too much fun out here with all the other bad influences in here.


Mary's doll is to be a gift for her 84 year old mother, who loves cats. The doll will have her knitting to pass the time, but by her side will be her gardening catalogues as she is dreaming of May 15th, time to plant corn and tend the roses. Hence, this lady's name is Rose Maycorn. (Mom loves to get the corn planted in May and her favorite flowers are her roses). and Mary loves to garden. She has named her doll Rose Maycorn. Don't you just love that name?
Posted by Unknown at 4:08 PM 5 comments: 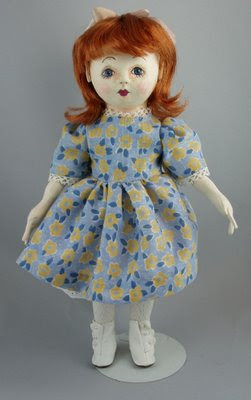 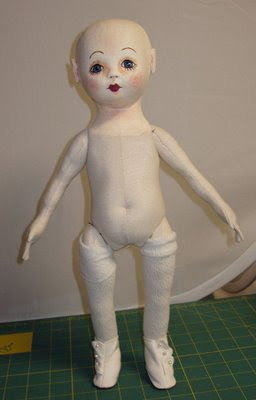 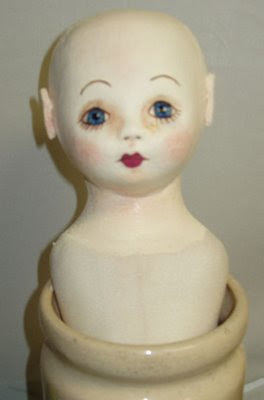 Ginger is my newest project created for a luncheon in April, the Joint Meeting of Doll clubs in Eugene Oregon. The theme for the event is Hats Off to Madame and will be a tribute to Madame Alexander dolls.

I created a mold from a Madame Alexander look alike doll head and made a mask for a cloth over clay head. Then I designed a body to fit the mask.

I chose ivory doe suede for the doll's body as I wanted a porcelain look for her.

She has really been a fun and challenging project!
Posted by Unknown at 6:30 AM 12 comments: 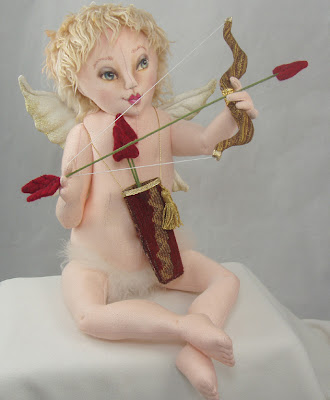 Cupid is my newest pattern and is available on my website at my pattern page. He is the perfect Valentine's Day doll to make as a gift or for your own Valentine's Day decorating! Very detailed instructions include great graphics and color photos!
Click on title to link to his page on my website!
Posted by Unknown at 6:21 AM 4 comments: 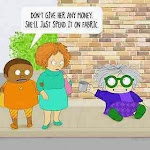